How to Respond to an Overly Bold LinkedIn Request 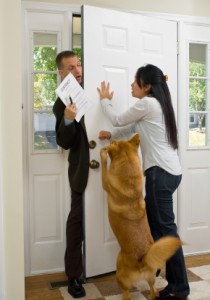 I received an email from Suzanne (not her real name) who had an interesting LinkedIn story that I bet some you can relate to. I know I can.

In his initial LinkedIn connection request, a man asked Suzanne if they could start referring leads to each other. Furthermore, he asked whether she had already met potential prospects that she could refer to him. Bold move.

As she put it, “Geesh, I didn’t even get a drink or dinner before he cut to the chase! I don’t know this person or his reputation from the Fed Ex guy. (Although, now I already find the Fed Ex guy more interesting, relevant, and nurturing!)”

She debated how to respond. She didn’t know him well enough to make referrals. But she was willing to give him a second chance.

Instead of simply ignoring the message, she responded with questions to see if it would be worth engaging with him, thinking that he could be a potential prospect or business partner who just doesn’t know how to network on LinkedIn.
So she asked:

Smart move… By giving him the opportunity to respond, she figured she would accomplish several things.

First, he would have to think more about her business, which would give her mindshare.

Second, he would have to think through the issues with his approach, which might help him improve his future pitches to others.

She knew that when you ask people to do this much work, most will drop it. But she knew that if he was willing to take the time think it through and respond to her, he might end up being a great referral partner.

He didn’t answer her questions at all.

Instead, he simply directed her to his website to go figure out the answers for herself.

And stupid too. The likelihood that he will get good referrals from someone he has never met, has no personal knowledge of, and has made no effort to even talk to, is virtually zero.

But how did he treat the one person who actually made the effort to respond to him and ask intelligent questions? He blew her off. I bet he’s out there now somewhere telling people that marketing online doesn’t work.

As she said, “Once I pulled myself back into my chair from fits of laughter, I realized some (perhaps most) people don’t know how to interact digitally. I imagine that if we were face to face he wouldn’t suggest I go research the material myself. He would have his 30-second elevator speech prepared and ready to deliver. I think this is a simple case of someone acting differently here as they would in the real world. Just as you warned against!”

We do have to remind ourselves that everyone has different experiences with digital engagement, and those ignoring unwritten rules could simply be new to online networking or have not yet learned how to do it. And, yes, occasionally someone abuses the service.

What would you do if this happens to you?