What Do CEOs Think About CEO Social Activism? 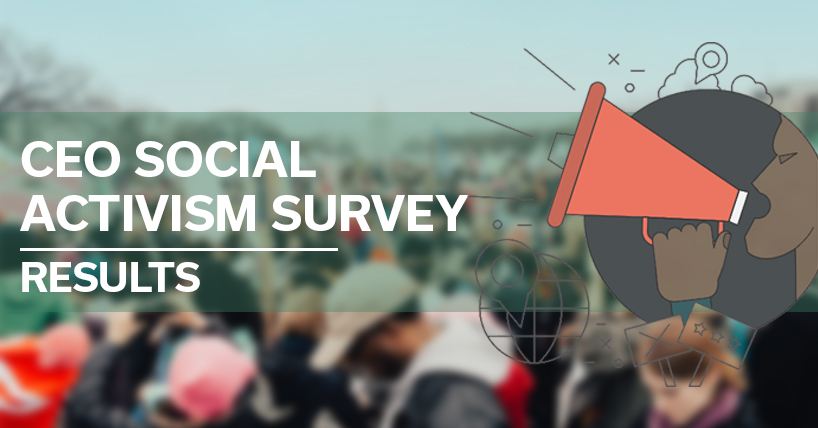 Regardless of which side we are on, all of us have been riveted by the political situation in the US. It’s an adventure that evolves day by day, one that has changed the way many of us interact with the news and social media. It has energized many people into speaking up and taking action on political and social issues.

I’ve also been watching how this plays out in companies – CEOs who have never been politically active before are taking public stands, and it has been interesting to see how this impacts their employees, customers, partners, and other business relationships.

I started looking into the impact more and found a fascinating white paper “The Dawn of CEO Activism” from Weber Shandwick. They did a survey to evaluate how CEO activism is perceived. One of the findings was that nearly 40% of American adults believe it is a CEO’s duty to engage with and speak out on hot-button issues.

According to their data, Americans hold a more favorable opinion of CEOs who take public stances on controversial topics. But there is a downside. 32% hold a less favorable view of CEOs who speak out on issues that are not clearly tied to the company’s core business. And while 40% of Americans are more likely to buy from a company when they agree with the CEO on an issue, 45% are less likely to buy if they disagree.

The study was published in June 2016, meaning that the research was done before the latest presidential election. I wondered if the results would be different now. We decided to survey CEOs to see what they thought.

Turns out, we hit on a hot topic. CEOs had lots of opinions to share. Interestingly, although there were clear patterns in the responses, when we did follow-up interviews, the reasons people gave for their answers varied widely. In this blog post, we will share the data from the survey. In our next blog posts we’ll be sharing insights and stories from the follow-up interviews.

The first question we asked was: 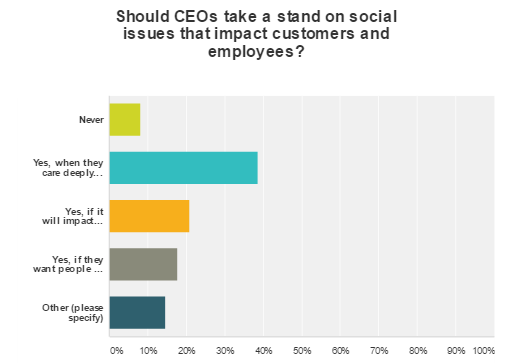 More than three-quarters of the respondents said they believe CEOs should take a stand. The largest group said it was appropriate when they care deeply about an issue. In fact, almost twice as many people believed it was important to speak up when they care deeply than if it impacted their business, which tells us that CEO activism is being driven by the CEO’s personal passion for an issue.

The second question was: 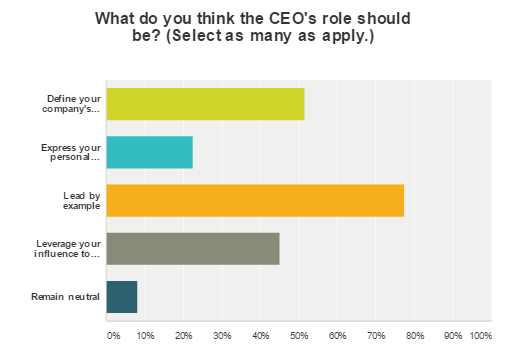 More than three-quarters of the CEOs believed their role should be to lead by example, while 52% felt the CEO’s role should be to define the company’s position, and 45% thought CEOs should leverage their influence to advocate. These are three very different roles, but they have in common the belief that as the leader of the company, the CEO has a unique role to play and the responsibility to act.

The third question was: 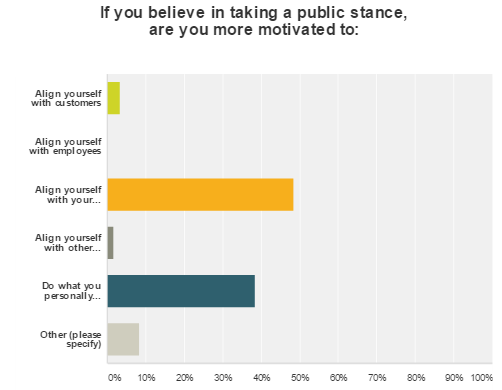 Almost half of the respondents felt it was important for the CEO to align themselves with the company’s defined values, 10% more than thought the CEO should do what he or she personally thinks is right.

When combined with the first question, where the majority of CEOs said that CEOs should take a stand when they care deeply, this seems to imply that the CEOs have personal values that are aligned with the company’s defined values. While the survey was anonymous, respondents had the option of sharing the size of their company, and 53% were CEOs of companies with 50 or fewer employees. So it isn’t too surprising that the CEOs of smaller businesses are closely aligned with their company’s values.

It is interesting that few of the CEOs responded that they were motivated by aligning themselves with employees, customers or other stakeholders, but it is possible that their company’s values have been defined in such a way that they represent the interests of those groups.

In the fourth question: 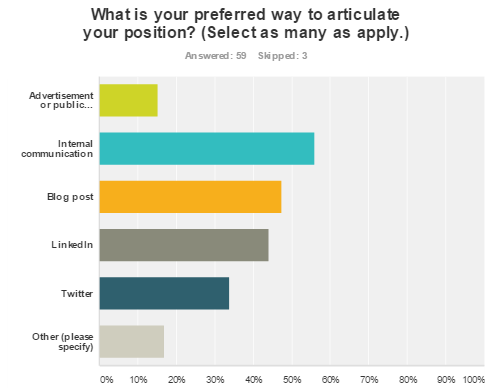 More than half of the CEOs said they would articulate their position through an internal communication, indicating that the most important audience was employees. Almost half said they would blog about it or be active on LinkedIn.

One-third mentioned Twitter, which is a little surprising given how much political activity takes place on Twitter now, but since fewer CEOs are personally active on Twitter than on LinkedIn it might simply reflect their desire to speak up on the platform where they are more comfortable.

“Other” responses mentioned town meetings or coffees with employees, letters to government representatives, and beBee.

In the fifth question, we gave respondents the ability to tell us whatever else they wanted to share, and to sign up to have a separate interview to delve deeper into their thoughts on this topic. We share the results of those interviews, which were fascinating, in these blog posts:

CEO Social Activism: The Benefits & Risks of Speaking Out

We contacted more than 1100 CEOs through LinkedIn and by email, inviting them to take the online survey. We reached out to CEOs of companies of all sizes, from Fortune 500 companies to start-ups. Sixty nine CEOs took the survey, which was open from February through April 2017. The answers were anonymous, unless a CEO identified themselves as open to a follow-up interview. Follow-up interviews were conducted by telephone.