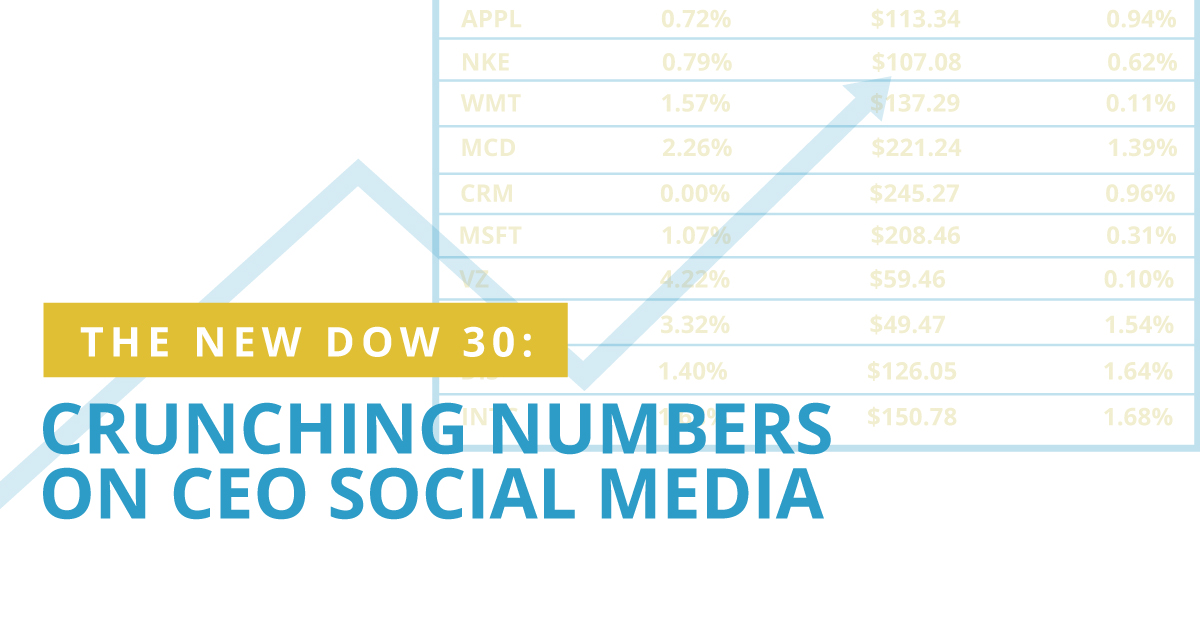 An elite club of 30 chief executives helms the companies that rule the stock market. How do they rate on social media?

Kristina Hooper, chief global market strategist at Invesco, summarized the changes in an interview with The Washington Post. “Being removed is an oil and gas company, a defense contractor, and a traditional pharmaceutical company,” she said. “They will be replaced by a software company, a biotech company, and a manufacturing and technology company.”

Gone from the 30 are ExxonMobil, Pfizer, and Raytheon Technologies. The new additions are Salesforce, Amgen, and Honeywell International, to reflect the still rising dominance of tech companies.

We ran our own analysis of Dow 30 CEOs and their activity on LinkedIn and Twitter. The revised list might have caused some ripples in the business world, but overall, these giants of industry are still getting their feet wet when it comes to a robust, social media presence — just 5 of the CEOs are active on both platforms.

Portrait of a Dow 30 CEO

While the Dow 30 companies represent a diverse collection, the same can’t be said about the demographics of their CEOs. In both 2019 and 2020, the group is all-male, and just three are non-white. Kenneth Frazier of Merck is the sole Black CEO on the list, and he does not maintain a strong presence on Twitter or LinkedIn.

Two Indian-Americans are represented on the list, Satya Nadella of Microsoft, and Arvind Krishna of IBM. 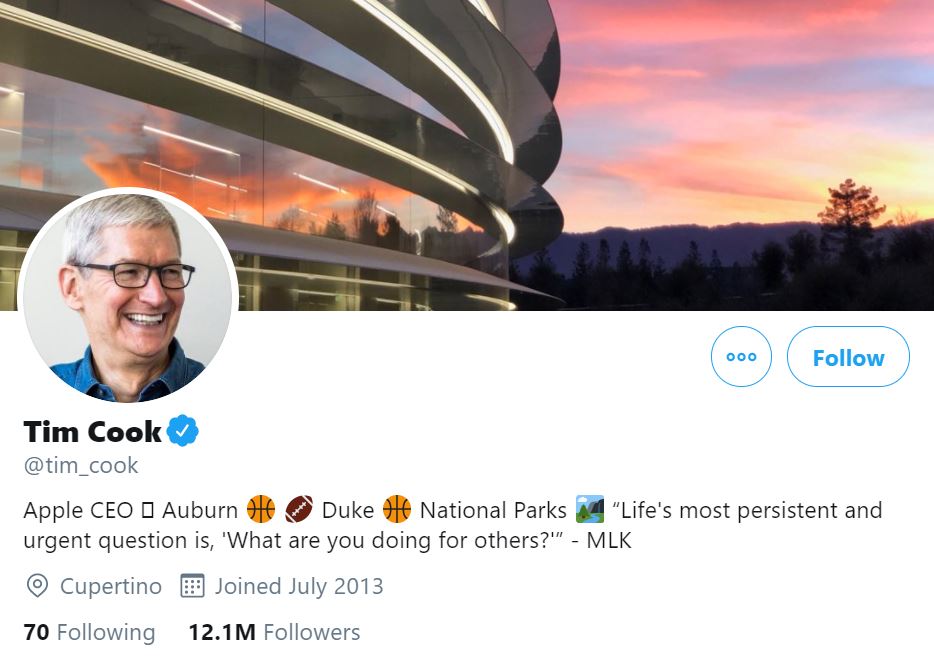 Dow 30 CEOs are seasoned executives with an average age of about 60. Nadella checks in as the youngest leader, at 53, while Stefano Pessina of Walgreens Boots Alliance is the oldest CEO at age 79. Pessina is not on either social media platform.

However, CEOs have larger followings on Twitter than LinkedIn. That likely has much to do with the format of each site. In general, LinkedIn promotes personal relationships, while Twitter features succinct posts for larger audiences. 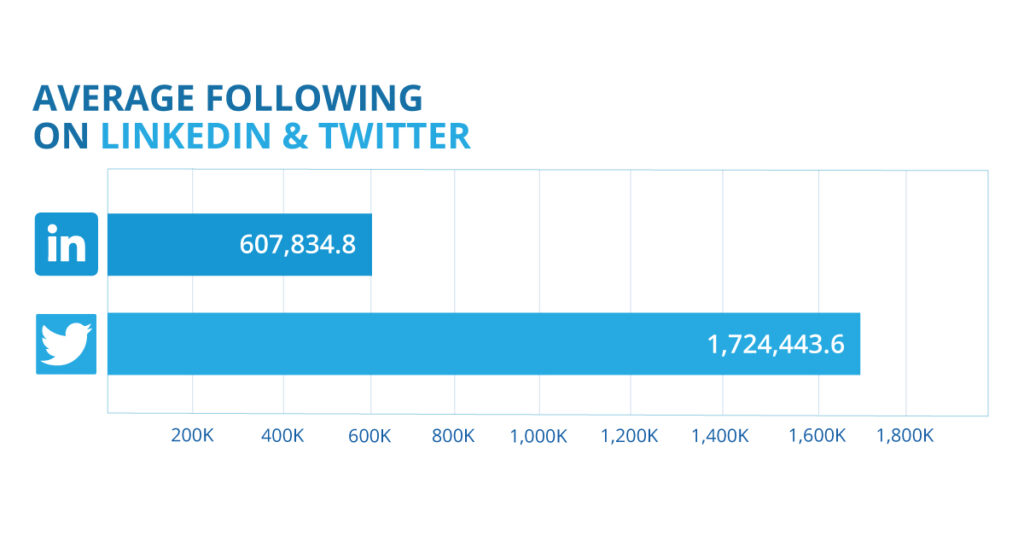 A Force (Salesforce) to Be Reckoned With

One thing we need to point out is that Marc Benioff of Salesforce, newly added to the Dow, is a beast on Twitter. He might not have the largest number of followers at 1 million, but he’s at 29.5K+ tweets and counting since he joined Twitter in 2009. 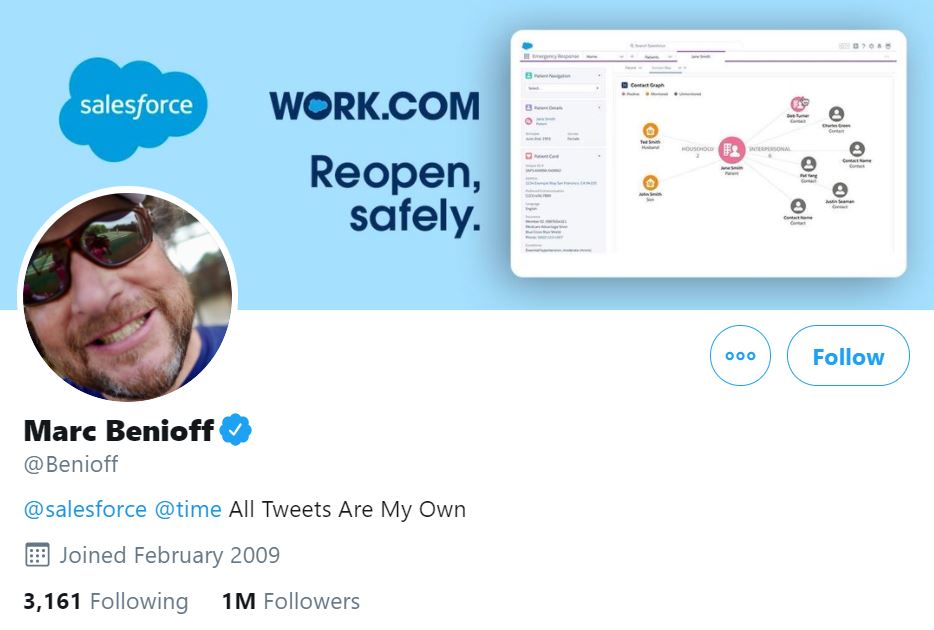 He talks about his company, shares clips from his frequent media appearances, highlights news stories, and shares his opinions on business issues. If you want to know where he stands on most topics, or simply want to follow the progress of his influential company, insiders know they can find Benioff on Twitter.

What isn’t represented by our data is why so many Dow 30 CEOs steer clear of social media. Could it be they think social media isn’t necessary in their position? Or do they simply lack the time? Social media works best when it’s personal, so even these giants of Wall Street can’t completely delegate their online presence. 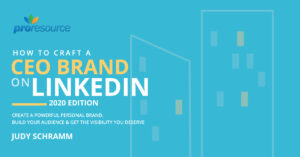 You don’t have to be a CEO to look like one online. Our latest eBook, How to Craft a CEO Brand on LinkedIn, shows you how to use LinkedIn strategically to build a strong personal brand, position yourself as a thought leader, and raise your visibility so you can make faster progress on key initiatives.

Who is your favorite CEO online?