Celebrity Sightings: Not Even Superstars Can Ignore LinkedIn’s Star Power 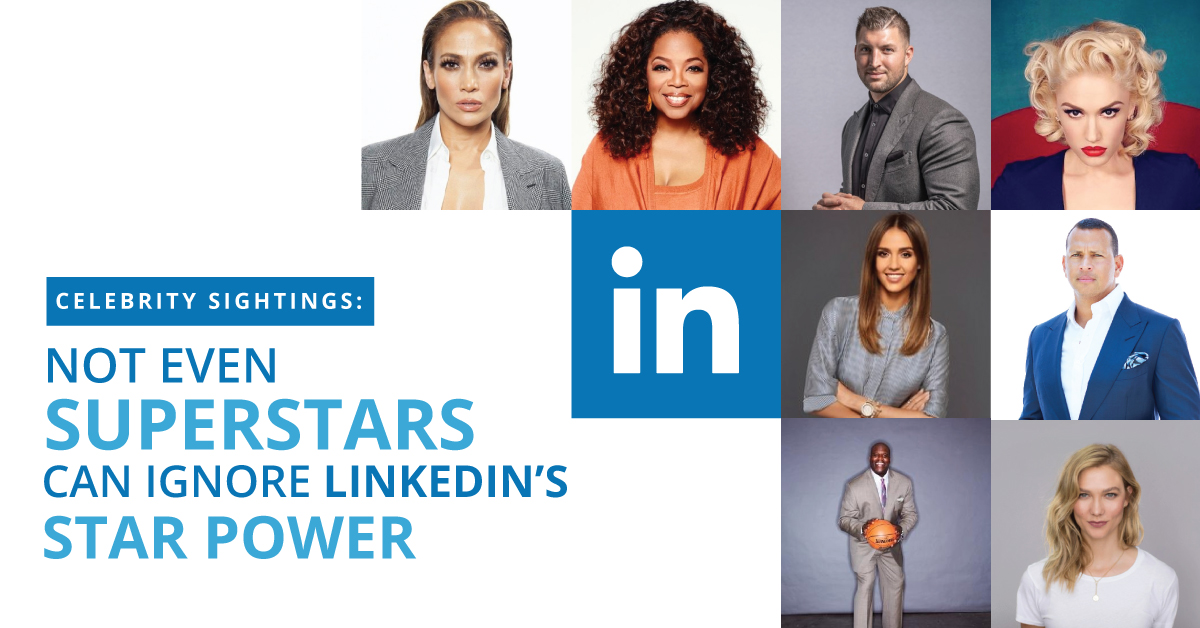 From the comfort of your couch, a cup of coffee at your side, you fire up your laptop and scroll through your LinkedIn news feed. What are the movers and shakers of the business world talking about today?

Bill and Melinda Gates opine on how philanthropy can save the world. Mary Barra of GM announces a new inclusion initiative. And, Jennifer Lopez promotes her favorite hair care products.

Wait, what? J Lo is a LinkedIn Influencer?

Famous faces aren’t new to the site. Celebrities who want to build a brand beyond the recording studio, playing field, or video screen, flock to LinkedIn, because in a socially connected world, no one can afford to ignore the world’s biggest professional networking site, LinkedIn.

LinkedIn extends invitations to Influencers, people the site identifies as, “a global collective of 500+ of the world’s foremost thinkers, leaders, and innovators. As leaders in their industries and geographies, they discuss newsy and trending topics . . . .”

Dressed as a chic businesswoman, and not a musical siren, Jennifer Lopez uses her LinkedIn profile in the much the same way the rest of us regular Joes do. Her posts are a mix of personal appearances, “likes” of her fiancée’s posts (we’ll take a look at Alex Rodriguez’s profile next), and ventures into more personal statements about both gender equality and Black Lives Matter.

Her listed profession is CEO of her video production company. She may have made her first million on the stage and silver screen, but her LinkedIn profile is geared towards establishing her as a successful entrepreneur.

She also hawks a haircare line she’s involved in, a bit of an unusual move for the business crowd on LinkedIn. But if a businessperson can promote an IT product or professional services on the site, is selling a beauty product so different?

Alex Rodriguez doesn’t mention his athletic prowess in his LinkedIn headline, but it’s still front and center in his header graphic, where he’s suited up in his iconic New York Yankees baseball uniform.

Rodriguez left baseball and started a career in sports broadcasting, but his main ventures, according to his About section, involve investment in startups and real estate development. Baseball and broadcasting can come and go, but Rodriguez demonstrates he’s diversified his business portfolio. Like Lopez, he’s using his profile to highlight a second career beyond what made him famous.

In 2012, Jessica Alba branched out from acting and started her own consumer goods company. The Honest Company sells environmentally friendly household and childcare items, a cause close to Alba’s heart as a mother of three. She has a large audience, with almost 1.8 million followers. Unlike most of the celebrity profiles we examine, Alba produces some unique content for her profile, in the form of articles, albeit somewhat infrequently.

Supermodel Karlie Kloss is more than just a pretty face, according to her profile. On LinkedIn, she touts the nonprofit she founded to help teens and young women develop careers in technology. She also highlights her more commercial ventures, but on LinkedIn, philanthropy comes first.

Shaq. Superman. Big Shamrock. Shaquille O’Neal, a man of many nicknames during his dominant basketball career, wears several hats in the business world, too. He seems to enjoys his life off the basketball court, and it shows in his upbeat and fun take on LinkedIn. He defines his brand as a businessperson who takes his job seriously, but not himself.

Former NFL player Tim Tebow more recently left his game, and he sports a more traditional and well-rounded LinkedIn page. He uses his past achievements to solidify his post-football bankability. His current job listing, XV Enterprises, A Company of Tim Tebow, promotes Tebow as more than football, more than public speaking, and more than business with the tagline: living a life of significance. All of these ideas are reflected on his profile.

Musical artist and television host Gwen Stefani touches upon her myriad of professional ventures on her profile. In 2016, she even collaborated with LinkedIn on a video for job seekers. However, she no longer holds official Influencer status and does not appear to currently be active on the site.

But Are They Verified?

Some social media websites offer verification techniques to ensure a celebrity profile is legitimate, which protects both the celebrity, and the platform user. If a celebrity on LinkedIn carries the Influencer badge, the profile has been vetted as legitimately being run by that person. But the number of Influencers on LinkedIn is relatively small. Oprah Winfrey is a longtime member of the LinkedIn Influencer program, although her public activity on the site is fairly limited. 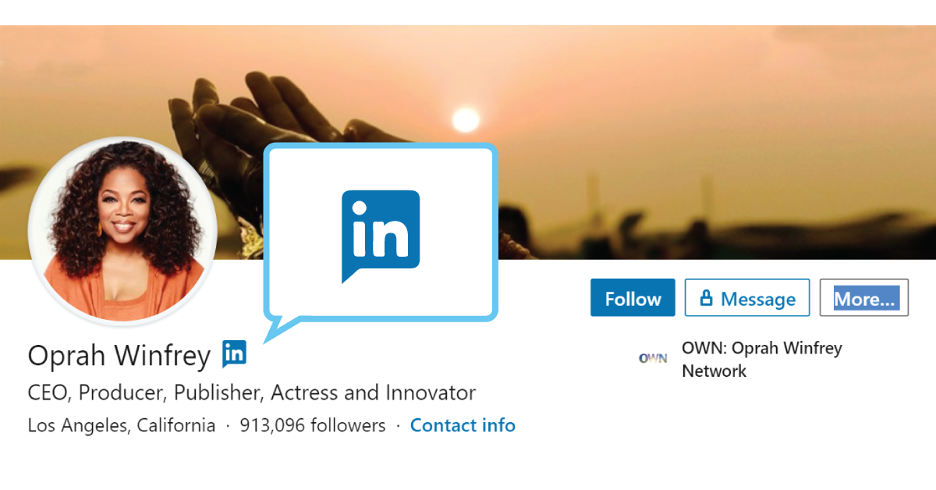 Even without the Influencer badge, there appear to be many other legitimate celebrity profiles. To check authenticity, visit a celebrity’s website and look for links to their authorized social media accounts.

As the lines blur between business and celebrity, watch for more famous names to walk the LinkedIn red carpet. With an audience of 706+ million users, a strong LinkedIn presence adds shine to even a celebrity’s luster.

What celebs are you following on LinkedIn? Let us know!