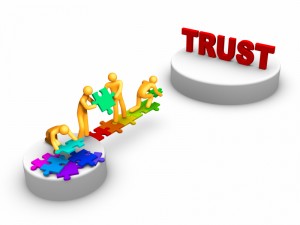 Although I’ve worked with many talented designers, there are few I recommend. All of them were responsive at the start of a project. However, as the project progressed, some of their follow-ups to emails, phone calls and requests stretched from hours to days to weeks. They’d miss due dates and leave clients hanging. Yet clients felt stuck with them because it was the middle of the project and it would take too much effort to find another designer to deliver on the company’s vision.

If the client managed to finish the project with the designer, you can bet that designer wouldn’t be invited back or receive referrals.  Not only that, but the client will tell friends and colleagues that the person is unreliable. It doesn’t matter if the designer can turn a brand into a rock star. The lack of reliability erased all that. The designer failed a key part of building trust: reliability.

To be reliable means making a promise and delivering on that promise.

The fastest and easiest way to get a relationship off to a strong start is to make a promise and follow through on that promise.

You don’t need to promise the moon. You can make small promises, such as promising to call someone next week. Or saying you will send an article by email as soon as you get back to the office. Or adding someone to a mailing list.

The goal is to create a situation where you can make a promise, and then deliver on that promise. That lets people see that you are reliable.

What most people do

Most people either don’t offer to follow up or they’re vague about how they will follow up. They hedge their bets because they know life happens, and they want to be covered in case things don’t work out.

You can stand out by making a promise with specifics, and then doing what you promise.

Three parts of an effective promise

Successful promises include the following components:

Make promises a regular part of your sales cycle. Every client interaction is an opportunity to make a promise and then follow through. The more often you do this, the more reliability you are showing.

Nothing builds trust better than following up on promises exactly as expected.