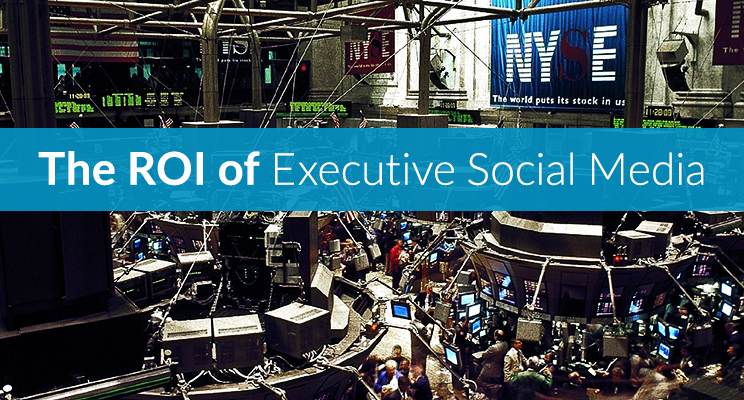 Is there a Return on Investment (ROI) from getting executives active on social media?

That used to be a challenging question. Not anymore. New studies show a clear ROI on multiple levels. In a new paper, The Emergence of “Social Executives” and Its Consequences for Financial Markets, researchers discuss the economic consequences of executive engagement on social media.

By analyzing the personal Twitter activity of CEOs and CFOs of S&P 1500 companies [1] from 2008 to 2014, these analysts were able to assess the impact of social media activity on financial markets. In this blog post, we review some of their findings. (More to come in our follow-up blog.)

Direct communications by “social executives” to their investors has been recognized by regulators (and communications advocates) as a change to the information environment. The researchers found that the work-related tweets these executives shared increased investor awareness of market activity and resulted in higher liquidity. In other words, more trading, more stable trading, and more accurate pricing.

The data shows that in the year after a top executive started using Twitter, the company’s bid-ask spread dropped substantially from the previous year. At the same time, the depth, daily turnover, and number of shareholders rose significantly.

The researchers also found that the greater the social media activity, the greater the impact for the company in the financial markets. The research shows empirically that enhanced social media communication generates greater information flows generally, (including expanding the flow of traditional corporate platforms,) which have greater impacts on the market (and on stock price).

The researchers distinguished between an executive’s social media and the company’s social media activity and found that “executive tweets provide unique and value relevant information to investors.” The researchers tested whether investors could use the executives’ personal tweets to predict future earnings above and beyond those forecast by professional sell-side analysts. They discovered that the tone in the work-related tweets, regardless of whether it was positive or negative, was a particularly strong predictor of future earnings surprises.

Researchers concluded that executive communications stimulate investor reaction and, consequently, have a measurable financial market impact. They found that after the Securities and Exchange Commission clarified its position on the use of social media under its 2013 Regulation Fair Disclosure [2], more executives began using Twitter to broadcast company news and share work-related day-to-day activities, including tweets that were pertinent to their firms’ operations.

The number of their tweets related to work increased suddenly, substantially, and permanently after the SEC clarified its rules. As a result, the researchers were able to establish a “causal relationship between top executives’ social media activity and improved market liquidity and wider investor bases via an enhanced information environment.”

Investors are more comfortable purchasing and owning stock when they believe they have real-time information concerning the business — and when they know it comes directly from the company executives who are running the business.

Savvy executives know that investors have choices when it comes to deciding where to invest. Strategic use of social media offers the executive a distinct advantage to engage directly with both retail and institutional investors.

The ability to inform, engage with, and ultimately influence investors through social media puts a company’s executives at the top of the list of its most valuable marketing assets. How CEOs and CFOs communicate with investors and broadcast news about their business doesn’t only impact their company’s reputation and brand, it also has a major impact on accomplishing financial objectives.

Companies that are weighing ROI considerations with respect to their marketing and communications options should be pursuing a social media strategy for its top executives.

Want to talk about how you could use social media strategically, given your current opportunities and goals? Schedule a 15-minute conversation or start with an Executive Social Media Audit below.

[1] This rule requires companies to distribute material information to the general public broadly and non-exclusively, so all investors can gain access to the information at the same time. The 2013 SEC report stated that companies can use social media to announce key information, provided that investors are first notified regarding which platform will be used.

[2] The S&P 1500 is a list created by Standard & Poor’s that includes publicly traded companies on the New York Stock Exchange, NASDAQ, and the Chicago Board Options Exchange. The S&P 1500 includes all the companies in the S&P 500, S&P 400, and S&P 600. These companies account for 90% of the market capitalization of U.S. stocks.