Politicians on LinkedIn Play It Safe 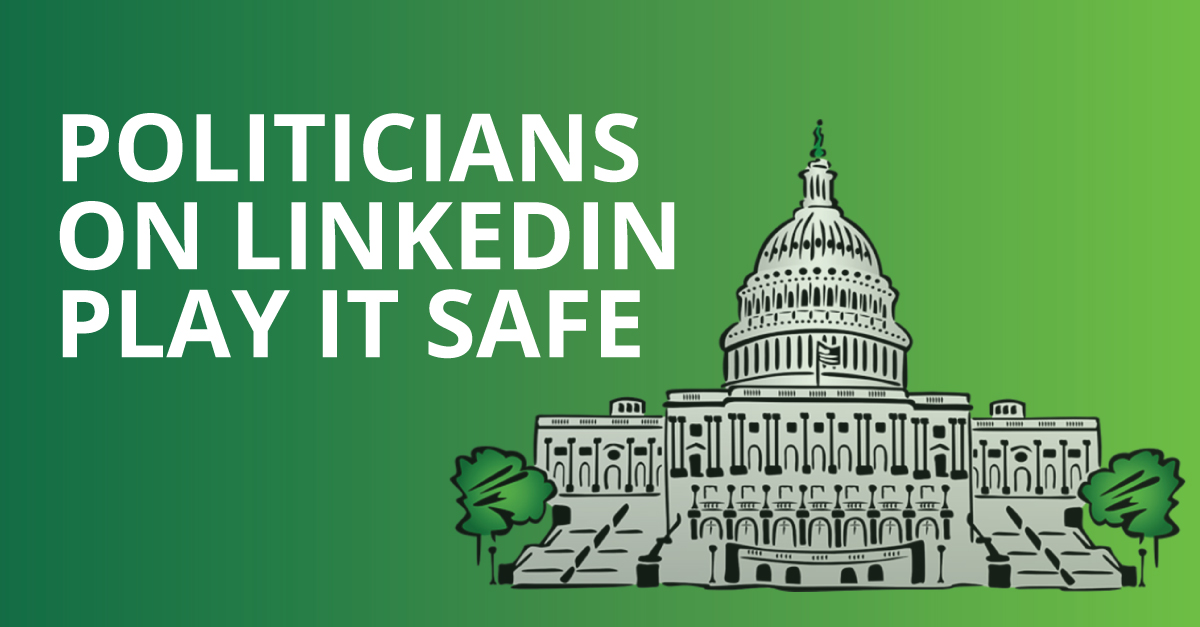 Facebook veers toward friendly; Twitter champions short and spicy; while Instagram wows your senses. LinkedIn traditionally provided a civil space to make bold statements, just not controversial ones. Now, even as many social CEOs take strong stands on LinkedIn, we found elected officials still play it safe on the world’s largest networking platform. Our informal survey of political profiles shows US lawmakers keep the polite factor front and center in their LinkedIn presence.

Who Is on LinkedIn?

When we wanted to find US politicians on LinkedIn, we first headed over to the House of Representatives and Senate websites. There, we found links to individual lawmaker websites, which often included links to their social media accounts.

But we didn’t give up our hunt for LinkedIn users, and we were able to pull together a collection of profiles from both local, state, and federal lawmakers.

When we did find LinkedIn profiles, we noticed different types of accounts. Most profiles are “owned” by the politicians, much like the personal accounts owned by you or me. 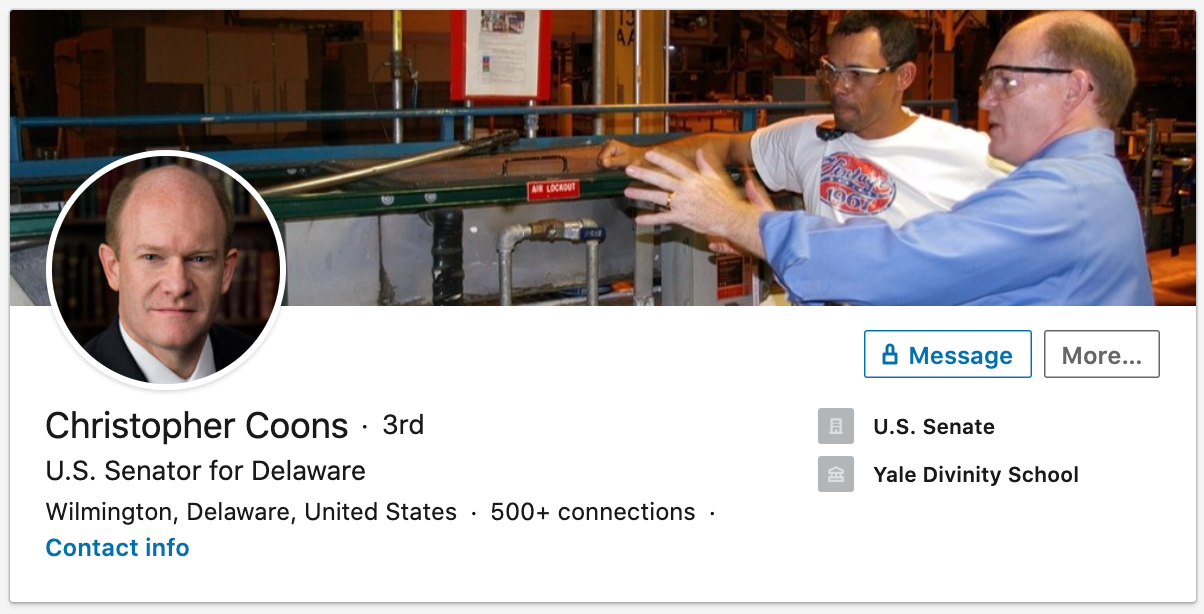 Yet other accounts are “official,” and belong to the office a politician holds. 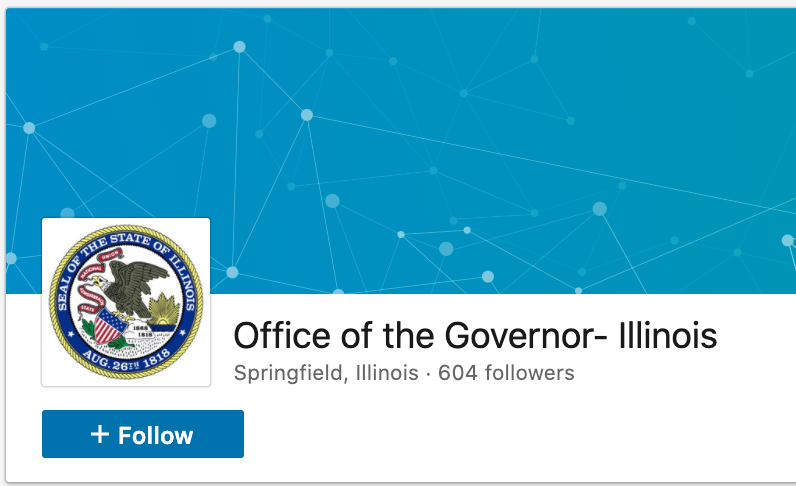 There are strategic, political implications in these designations. As we’ve seen over the past four years, social media posts from official accounts are subject to legal rules. Government accounts can be prohibited from blocking followers and are subject to restrictions on content. A statement from an official account can be construed as policy, while comments from a personal account are more likely to be viewed as opinion.

The governors we looked at tended to weigh in on official matters in a non-partisan way, however, it was fairly easy to guess political affiliations looking at topics and news sources.

California Governor Gavin Newsom also has his own page. 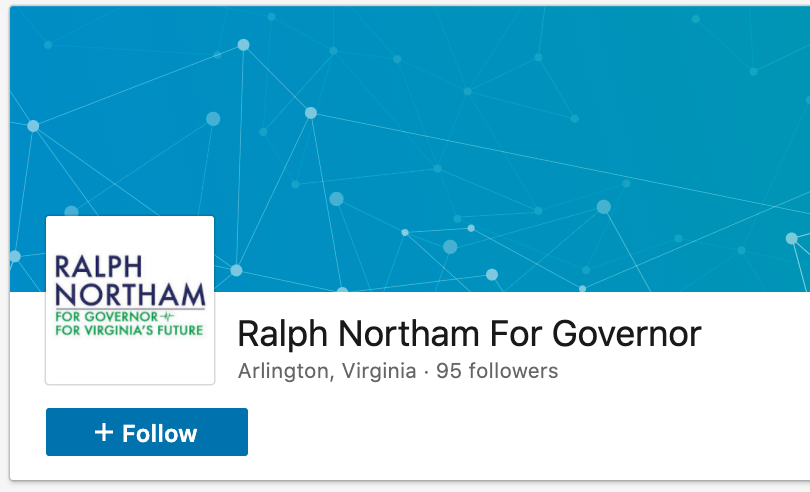 We did not find a lot of active campaign pages and only one with somewhat recent posts. Congresswoman Alexandria Ocasio-Cortez is extremely active on Twitter and other platforms, but you’ll find far fewer and less frequent posts from her LinkedIn campaign page. 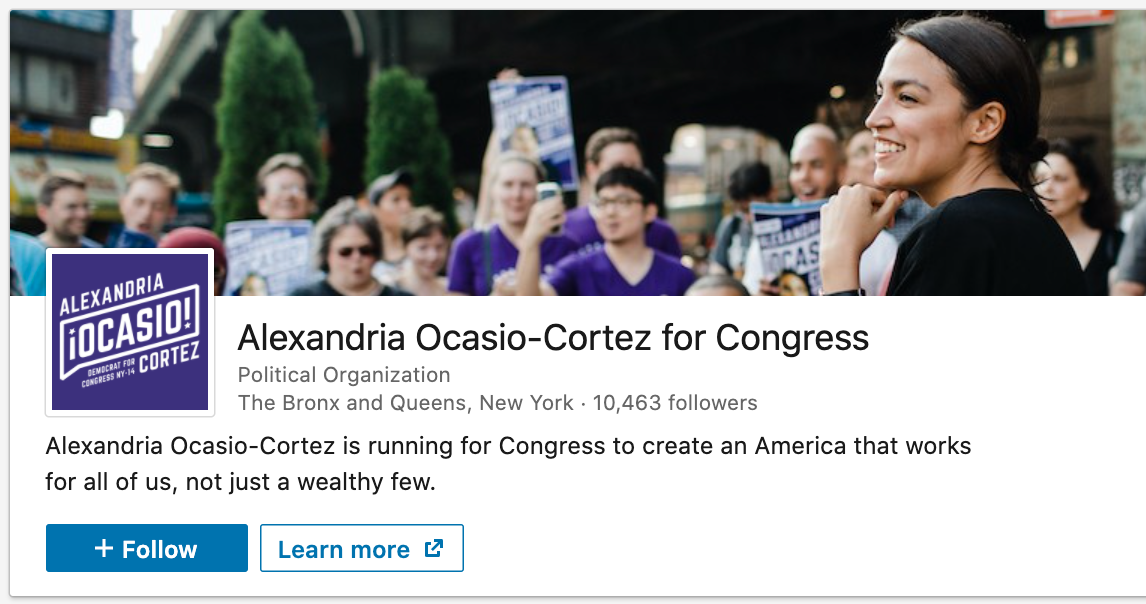 The most active politicians we found on LinkedIn are familiar faces to anyone who watches cable news. They’re outspoken in public forums, including social media, and unafraid to express their views ― even on LinkedIn. Political pundits predict many of them may pursue higher office.

Congressman Kevin McCarthy is the Minority Leader in the US House of Representatives.

As Governor, Andrew Cuomo received attention in 2020 as the public face of New York State’s response to COVID-19. 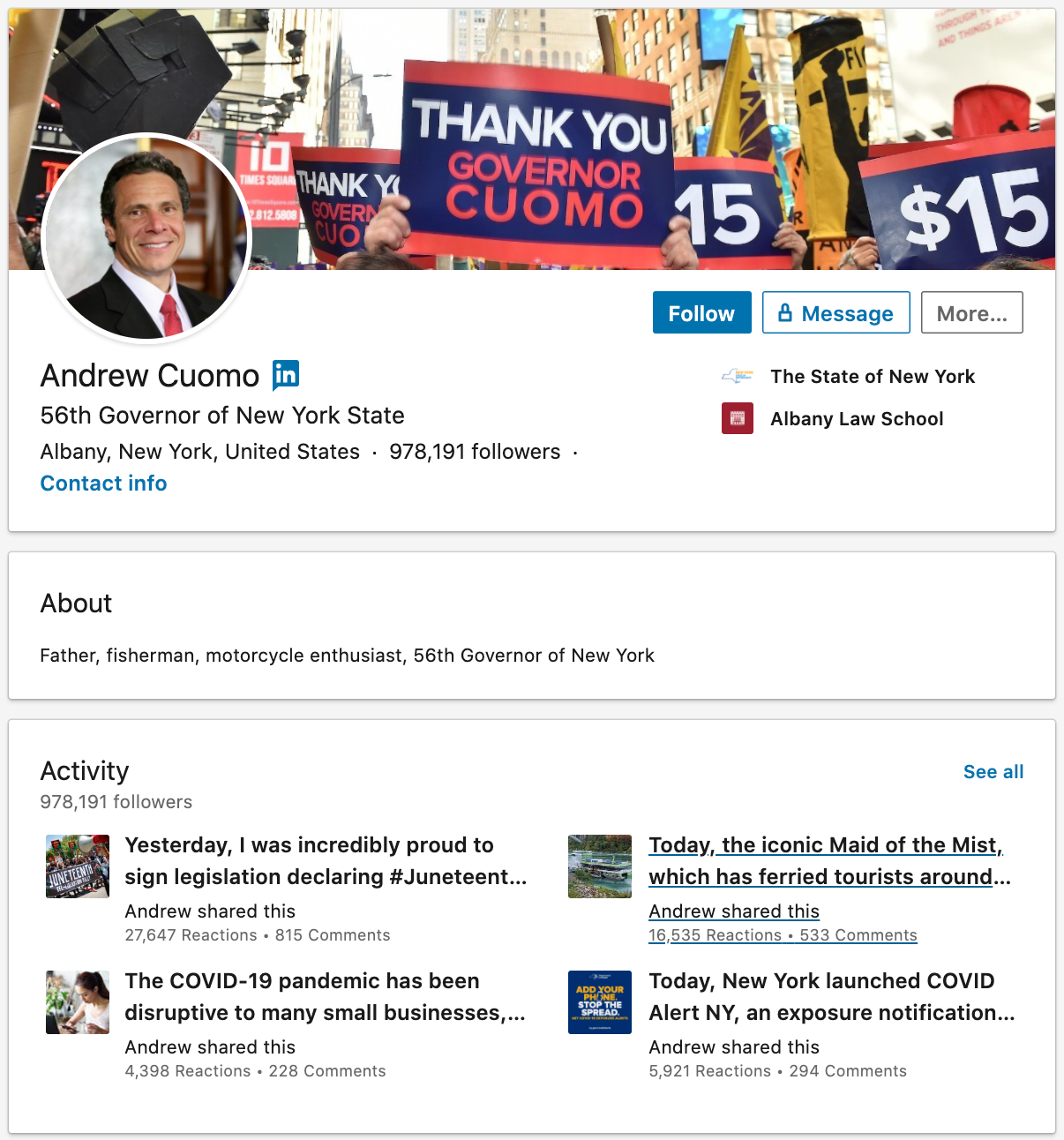 Another lawmaker not shying away from politics in his LinkedIn posts is Senator Mark Warner of Virginia.

Overwhelmingly, lawmakers we audited have basic LinkedIn profile pages with few posts. It’s a presence that feels like an afterthought. We have heard a similar perspective from some executive clients who have profiles because they feel like LinkedIn can’t totally be ignored, even though they don’t want to be active on the platform.

California Congressman Ted Lieu tweets almost daily. On LinkedIn, he maintains a bare bones profile with no public commentary. He even uses his profile to promote his other social media accounts. 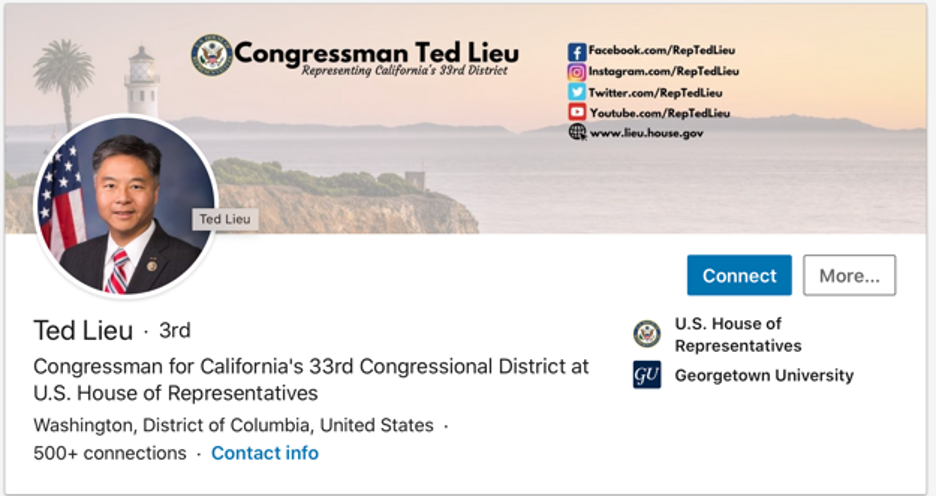 Or Can It Be Ignored?

We also found some of what we call “fix and forget it” profiles, pages that were started, but not updated, despite changes in the officeholder’s status. For example, Governor Ron Desantis was elected Florida’s top lawmaker in 2019, but in October of 2020, his profile still listed his past office of congressman as current. 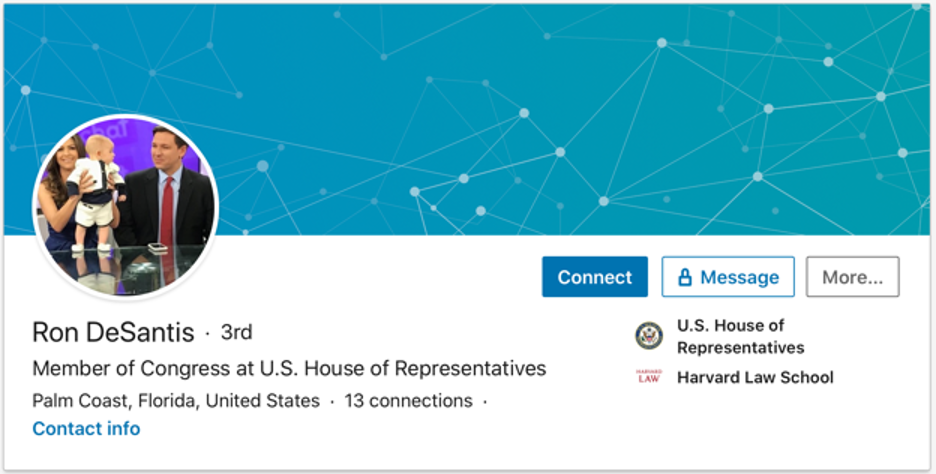 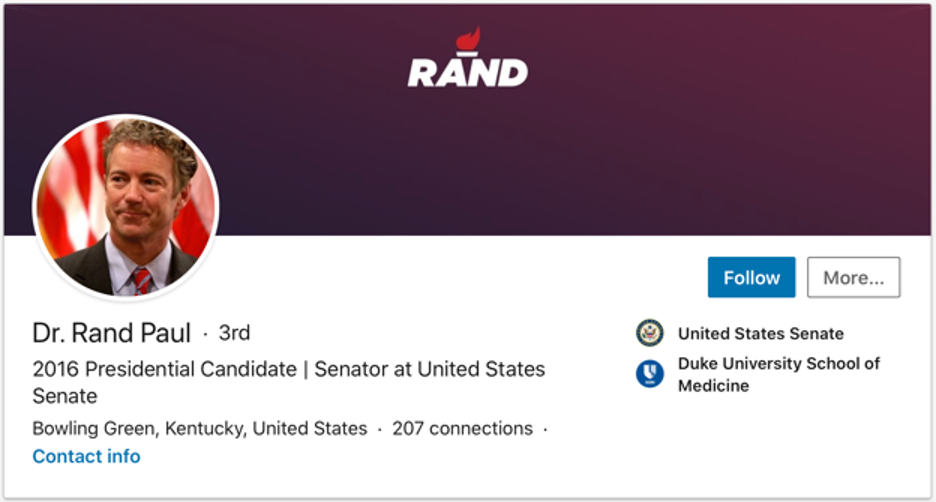 We found state legislators and local lawmakers on LinkedIn, too. The politicians we looked at, who work and live in the communities they serve while often holding other jobs, have profiles that look more like your typical business executive.

Pat Herrity is CFO of an IT company and serves as a county supervisor. 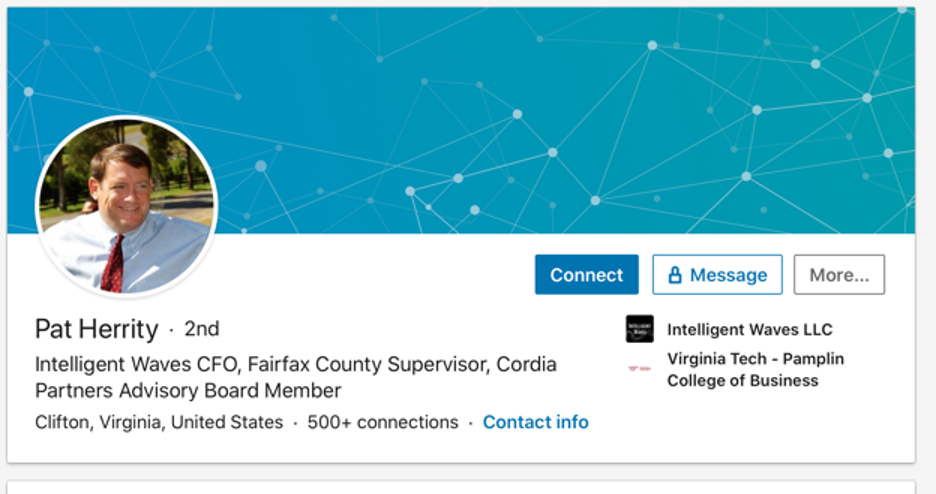 Before becoming a state senator, Tim Kennedy was an occupational therapist. 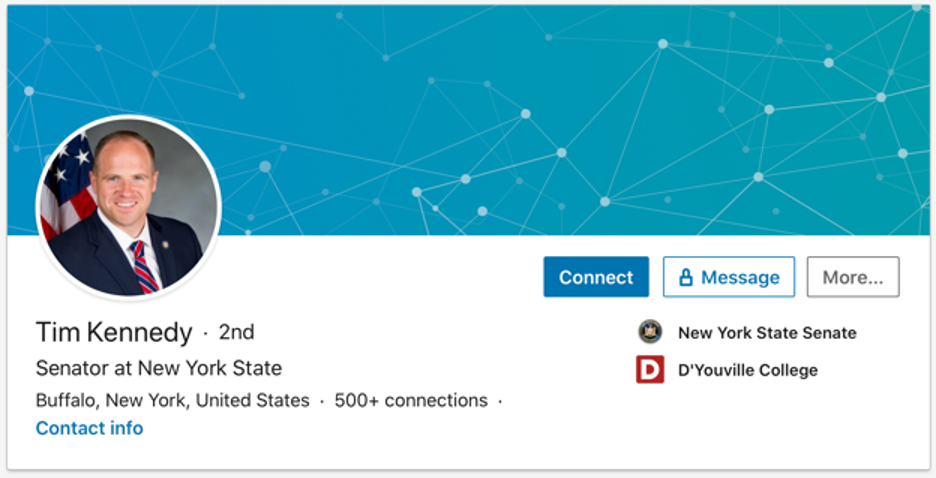 Arguably the most famous US politician with a LinkedIn profile is Barack Obama. However, the former president keeps it low-key on the platform and uses the social media accounts of his foundation to spread his message. 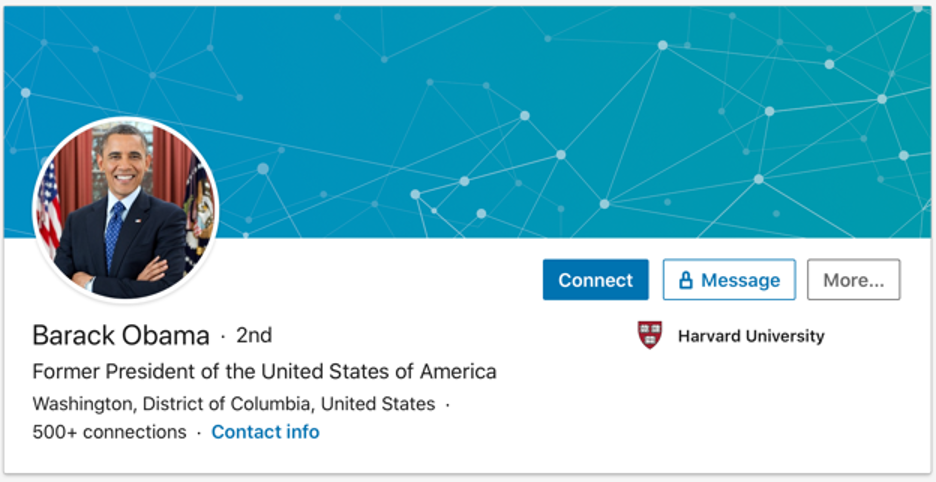 An honorable mention to international lawmakers active on LinkedIn: Canada’s Prime Minister, Justin Trudeau, is designated an official LinkedIn Influencer. He posts in both English and French. 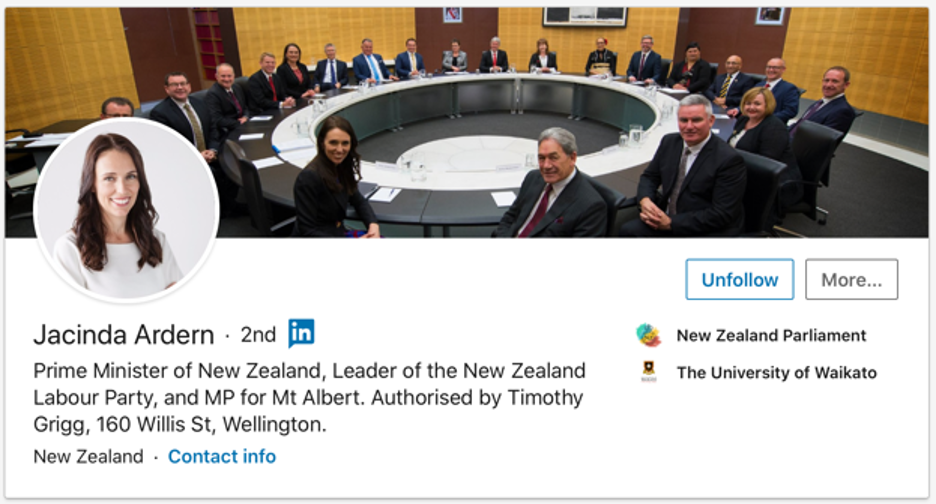 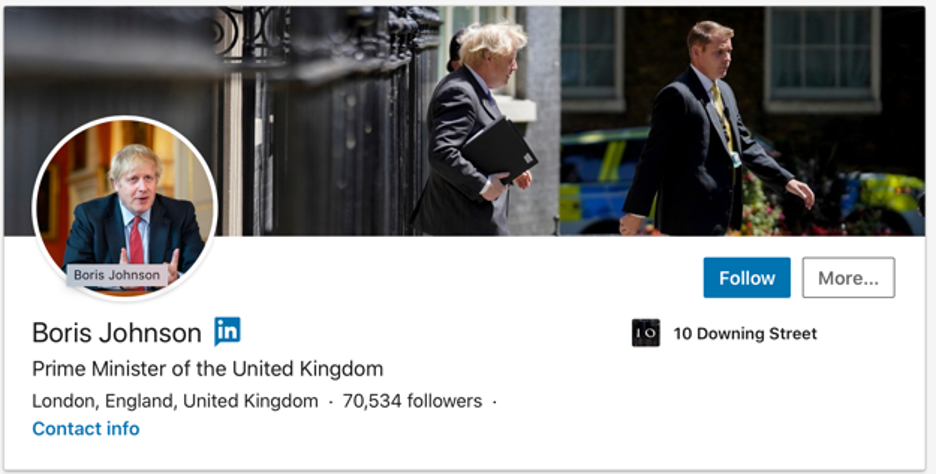 Narendra Modi, Prime Minister of India, boasts a staggering audience with more than 3.5 million followers, but no posts.

As the US election approaches, LinkedIn is prepping for increased political discourse, in addition to amplified discourse on social issues. Our last blog highlighted the steps LinkedIn is taking to keep conversations on the platform civil. Unlike Twitter and Facebook, LinkedIn has avoided much, but not all, criticism, over its revised user policies.

But for now, LinkedIn is not the platform of choice for most political figures. We wonder if the nature of politics will keep it that way.

Political conversations can be tricky, online or in-person. Join us on Wednesday, November 4th, for tips and strategies to keep your cool when handling difficult social media posts.

Note: Politicians keep it polite on LinkedIn, and so do we. This blog takes a look at politicians and their LinkedIn activity, but this is in no way a political analysis. Please keep this in mind if you comment on this article.

We looked at these profile in October 2020, and it’s possible for the pages to be updated by their owners at any time. In fact, we found pages changing even as we wrote this article.