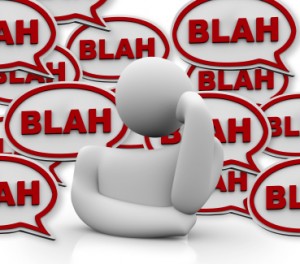 Whenever I have new followers, Twitter notifies me. This way I can check them out and follow back if they’re worthy. Many times, I pass on following back because some of these users’ tweets are mostly self-serving. Social networking will not pay off for these people because their actions resemble the networking abusers in Stop Networking … Start Building Relationships.

Instead of handing out and collecting business cards, these online networking stragglers drone on about their business. This activity is comparable to passing out cards without bothering to have a conversation. It takes no time to identify the anti-social people of online networking.

Here are the comment behaviors of the anti-social in online networking:

People doing these activities may be new to social networking and aren’t aware they’re not using it to its fullest. Yes, we can post self-promotional updates. It’s how often and how you go about it that makes a difference.

I’ve seen a few good rules of thumb about how often to share self-serving updates, such as:

It also helps to explain what value people will get out of checking your website, article, free download, Facebook page and webinar. For example, “For tips on how to get more customers and get help with your business, visit the ProResource Facebook page.”